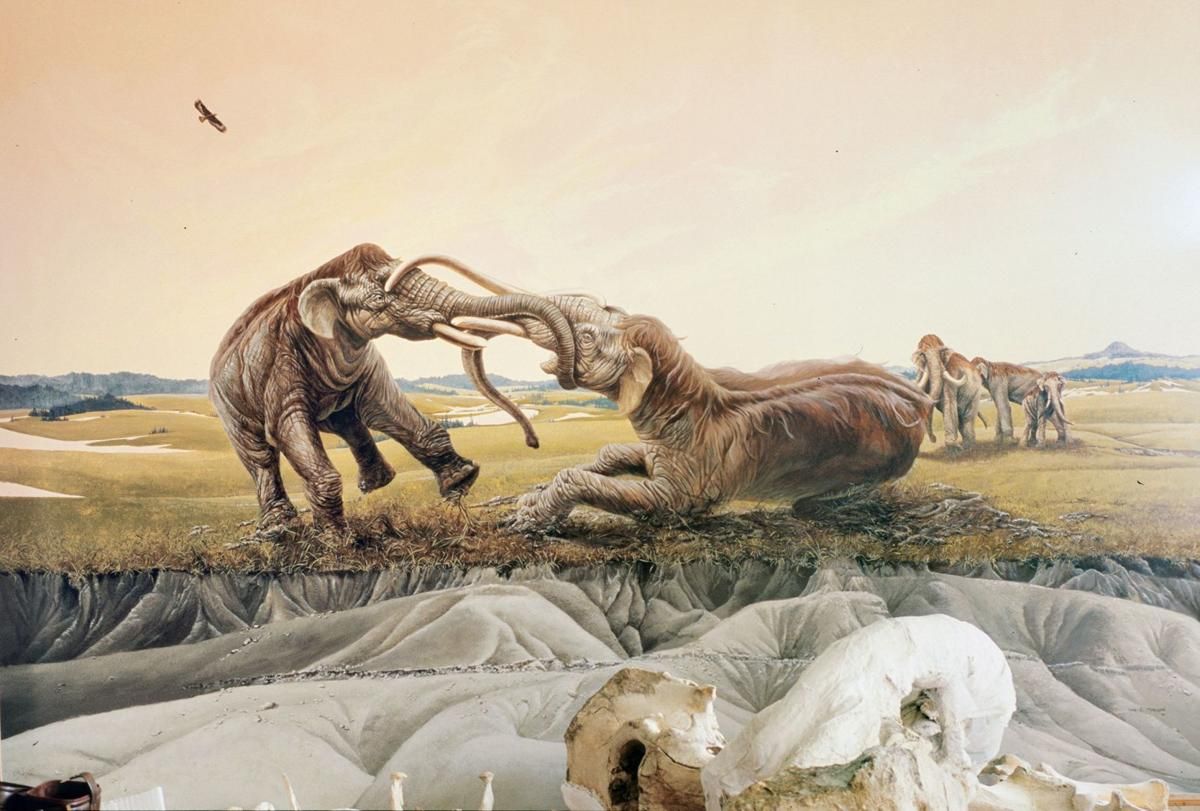 Clash of the Mammoths

More than 10,000 years ago, a pair of "testosterone-crazed" bull mammoths crossed paths on the ice age high plains in what would one day be western Nebraska.

Nearly equal in size and around 40 years old each, the two Columbian mammoths -- one with a snapped tusk on the left, the other with a break on the right -- battled for mating rights. However, fate thwarted desire.

With the broken tusks allowing each to jockey in close, the titans locked together and never separated. Eventually -- after hours of exhaustive pushing or moments after a decisive twist -- one fell, dragging the other to the ground, and each to their death in the Little Badlands north of Crawford.

Preserved under layers of sediment cascading off the Little Badland formations, the dueling titans were discovered in the summer of 1962.

"We don't know exactly why they fell down, but it seems almost as if fate conspired against these two," said Mike Voorhies, a vertebrate paleontologist at the University of Nebraska-Lincoln at the time. "They really suffered some bad luck.

"In spring 2006, the mammoths returned to the Panhandle in a new "Clash of the Titans" exhibit at the Trailside Museum in Fort Robinson State Park near Crawford. The fossils had been at UNL since they were found, with the University of Nebraska State Museum recently resurrecting a plan to put the one-of-a-kind find into a proper exhibit.

Museum preparators Greg Brown, Rob Skolnick and Ellen Stepleton prepared the fossil for the exhibit. And, according to Mark Harris, then associate director of the museum, the "Clash of the Titans" exhibit was initially a work in progress, allowing Trailside visitors to watch it progress toward a simulated dig site.

Visitors are able to walk around the exhibit and see these mammoths more or less as they were found in 1962. It is very dramatic, seeing these giant mammoths who died fighting each other.

In addition to the new exhibit, further improvements at the Trailside Museum include a new mammoth mural by Nebraska artist Mark Marcuson. Marcuson is known for his murals featured throughout the State Museum at Morrill Hall on the UNL campus, including the notable mural in Elephant Hall, portraying Ice Age mammoths along the Platte River.

In 1962 Voorhies was a senior at the University of Nebraska, leading a State Museum crew in a search for ancient mammals in the badlands. When the weather would not allow the crew to go into the field, Voorhies helped set up exhibits in the Trailside Museum.

One day, two men from the area brought a fossil wrapped in a feed sack into the museum.

"That bone was quite a surprise," said Voorhies. "We knew right away it was an elephant. They are pretty scarce in that part of the state, so we went out to look and scratch around a bit."

Voorhies noticed a large amount of bone and received permission from landowner Tom Moody to start a dig. Moody helped, removing the uppermost layers of soil with his backhoe. Voorhies and other members of the crew scraped away the remainder of sediment and eventually discovered two skulls.

"When we started to uncover the mammoth, the point of the tusk was headed the wrong way," Voorhies said. "We thought that when the elephant died that it fell forward and broke a tusk and it pointed back toward him."

The discovery of a second skull jolted the 21-year-old dig site leader.

"It was probably the most exciting fossil I've ever seen," Voorhies recalled. "Someone with a lot of experience would have known right away. We were basically teenagers without a lot of digging experience, flying blind."

However, the young paleontologists realized they found an international treasure. Covering the bones in shellac then protecting them in layers of paper, burlap and plaster. The agreement with Moody allowed the skulls to be moved to Lincoln and required the mounting of one of the skeletons for display at the Trailside Museum. The skulls and remaining skeleton were to stay in Lincoln for study until a newly renovated, secure exhibit space could be created at Trailside.

Return to the Panhandle 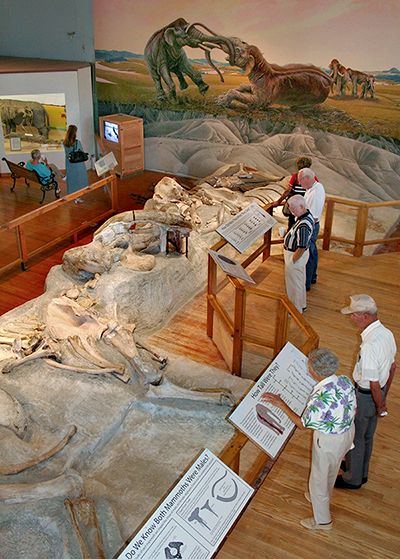 Clash of the Mammoths

Years flew by with the fossils in storage, and now, improved exhibit technologies and funds from the state of Nebraska and Friends of the Prehistoric Prairies Discovery Center have made the return possible after 43 years.

"When I returned to the university in 1975, it was great to see the old Crawford mammoths still here in the collection," Voorhies, who had gone on to graduate school at the University of Wyoming and taught at the University of Georgia. "It is by far the best mammoth material in our collection right now. But, it's going to definitely be a plus to get this back out to Crawford.

"This is a unique, dramatic fossil and it stirs the imagination to think of the struggle these two put up before they fell."

"This fossil is something that means a lot to the people of Crawford," said Mike Liete, a professor of geosciences at Chadron State College and member of the Friends of the Prehistoric Prairie Discovery Center. "This return is something that the people have been waiting for since the mammoths went to Lincoln in 1962."